Christmas is a magical day, especially when a toddler is involved.

This was Zoe’s second Christmas, and I had plenty of friends tell me, that at 16 months she would still be to young to understand. Well this little lady, understood plenty, and had a blast.

Let me start from the beginning…

Thanksgiving ended, and I was ready to start getting in Christmas mode. My favorite part about Christmas is the Christmas Tree.

December is for Tree Picking…

I always get a live tree.

I love picking it out, and cutting it down. Cutting down a tree, means it is always fresh.

This year we went to Middleburg Tree Farm to cut our tree down. We went early in the season, so there was an incredible selection. I normally like a Douglas Fir, (yellow green needle), but this year we switched it up and got a Blue Spruce. The Blue Spruce has a blue, gray needle, and our tree was absolutely stunning.

Once we got the tree set up in the house, Zoe pointed at it, saying, “Tree?” She is use to pointing at the trees on our run, so she was a little confused on why there was a tree in the living room.

I tested out the Christmas tree lights, while Zoe played with them.

It took me three hours to baby proof the tree. I had to arrange the ornaments in a certain way so that they would be safe for Zoe. But once the tree was completely decorated, I explained each ornament to her. She was very good at just looking, and not pulling off the decorations. Her favorite ornaments were the monkey, and elephant.

We made an appointment at the Tysons Gallaria to see Santa. This worked really well last year, no line. Unfortunately, this year, with no line, and no one else there, which made it really hard to show or explain to Zoe what was going to happen. It is totally normal for children her age to be scared, and that’s exactly what happened.

After she was finished, two older girls jumped on Santa’s lap and hugged him, naming all of the presents they were wishing for. Zoe watched them, and then looked at me like she wanted a do-over.

I love to receive Christmas cards. So this year I decided I was definitely going to send one out. So I made one with Zoe on it, and love the finish product.

Although, I got them out early, I didn’t feel it was early enough. Next year, I want them ready during November, so I don’t have the extra stress of getting them done in time.
I displayed all of my the cards I received.

This year I hosted Christmas Eve. Erik and I made lasagna. I made my homemade sauce the night before, so all Erik had to do was assemble the lasagna. I also made a roasted beet and brussel sprouts salad. It was fun having everyone over.

On Christmas Eve, I stayed up late making my homemade granola. Filled them in mason jars, added a bow and tag, as my homemade gift.

Christmas Morning…
I woke up early, to make cinnamon rolls from scratch. Once all of my presents were wrapped we headed over to my moms.

It took three hours to open all of the presents. Zoe was really into the whole process. She would open the present, then want to open the box to play with the toy.

Her favorite presents were her Elmo stuffed animal, her tea set, her giraffe bike, and her play running stroller.

Everyone was happy, but exhausted. We ended up heading home for afternoon naps.

While everyone napped I snuck out for a Christmas run!

The sun was shining, and my run felt very rejuvenating.

We headed back over to my mom’s house for Christmas dinner. Emily and Ryan made a salad and a rib roast. Everything was tasty.

Zoe played more with her tea set. She kept asking everyone if they wanted any. She would ask, “Cuppy? Tea?

This holiday season was so special! I am beyond thankful for every card, every gift, delicious food, beautiful decorations, and being able to spend it with my closest family and friends.

And of course I am beyond thankful that my 16 month old daughter, Zoe, had a magical Christmas season.

How was your Holiday? I hope it was warm and joyful!

Christmas is over. (sigh)

I have mixed feelings about this.

In a way, this Christmas season was stressful.┬ĀThanksgiving was so late. Christmas came so fast. I was super busy at work. I felt like there was no time to shop, plan, cook, chop down a tree, send out cards etc… The on going Christmas music started to annoy me.

But in┬Āanother light, I am sad to see it go.

I love shopping at the Christmas market in DC. And seeing a random person dressed up as Santa really puts you in the Christmas spirit.

Also during Christmas time. My house looks amazing with classy Christmas decorations. I loved all of the Christmas cards I received. They are my favorite!

My dogs love Christmas more than anyone I know.

Now that my husband and I are married. My sister thought it would be a fun idea to start a new Christmas tradition. So this year, I hosted Christmas Eve. We drank Cranberry Champagne.

We ate my homemade┬Ālasagna – the sauce was my nana’s recipe.

On Christmas day, we woke up early, and went to my mom’s to open presents. We all gave and received some great gifts.

Then for dessert we ate my homemade Mexican Hot Chocolate Cake with Chocolate Buttermilk Frosting. The cake is gluten free.

The day after Christmas, my sister and I did a little shopping. I definitely have a new outfit to wear every day of this week. She got some great stuff too. I know this isn’t a fashion blog, but I’ll post my outfits on instagram just in case you are interested in what I wear when I am not in workout clothes. ┬ĀOh p.s. Did you know free people now has workout clothes? They are pretty stylish.

On Saturday, we did Christmas with my husbands parents. It was fun to open more presents, and hear all about their lovely time spent in Idaho. Lucky for them, they had a White Christmas.

At the end, of it all, my favorite part about the holiday is eating good food, drinking good drinks, and hanging out with loved ones. Oh and watching some great Christmas movie.

I hope everyone had a lovely holiday!┬Ā

What’s your favorite thing about the holidays? Did you receive any awesome fitness related presents?

This year’s holiday season was non stop. It actually was the busiest holiday season I have ever had at the salon. Busy is good, but it is also exhausting, and stressful.

So when I got to leave the salon early on Christmas Eve, I decided to hit the trail hard. Snow flurries were among the wind blowing, but it was sunny, and I made it just in time to get a good run in before the sunset.┬Ā

I love running at this time. You see a ton of wild life on the water, and this time the sky turned pink- so bright it matched my jacket.

My family never does anything on Christmas Eve, so we ended up all at my mom’s and ordered Chinese. Honestly, there are no good Chinese Restaurants in the DC area, so we ended up ordering from Charlie Changs. I haven’t eaten Chinese in over a year. It was a true test to my taste buds. Once you start eating clean and eliminating added sugar your taste buds totally change. This food tasted way to sweet,and processed- like a TV dinner. YUCK! If you are from DC and know of a good Chinese Restaurant clue me in please…

This year was the first time that I cut down my own tree. I went once with my family as a kid, but my fiance and his parents have been cutting down their tree for the last couple years so this year I joined them.

I asked the farm if they had Douglas Firs. They didn’t, but they had other types of Firs, that looked similar. It was a fun outing, and really awesome having a fresh cut tree. 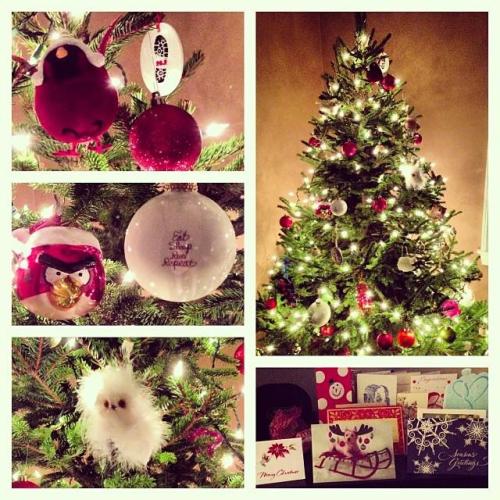 Because work was so busy, it took a whole week to decorate. But it finally got done. It is so relaxing to sit next to a beautiful lit tree. The tree part is one of my favorite things about the Christmas holiday. I also love Christmas Cards!

The Best present a Runner could ask for…

Of course a lot of the stress about this Holiday is finding the perfect gift. And for some reason my family says I am the hardest one to shop for. Honestly, I think the receiving presents thing is getting a little bit old. It’s much more fun when you have children around who get excited about Santa. However, because we have no children in my family, it is just adults exchanging presents, which feels a little weird since we are all lucky that we are able to buy our own things. This is why it becomes even harder, to find that fun creative thoughtful gift. I made my Runner’s Wish List, and never thought or heard of this wonderful idea my little sister came up with…

This is a jar of pink, blue, ┬Āand green pieces of paper rolled up into scrolls.

When I am in need of a new song to add to my running mix on my iPod I choose pink, unravel it and there will be a song title and artist. This is perfect because I am always desperate for new music.

If I am lacking motivation, I choose blue. I unravel blue and a motivational quote will be there to help me get my booty moving.

If I am sore from miles and miles of running, I can choose a green scroll which will teach a yoga pose or stretch. The jar also had socks, and headbands in there as well.

This is a home made thoughtful gift and I love it! So creative. My favorite part is the phrase on the front, “Its a runners world, because 26.2 is my lucky number.”┬ĀThis gift is definitely making my Runner’s Wish List next year.┬Ā

So after breakfast and gift exchange, my sister and I went for a quick 5K loop. It was a great neighborhood run- towards the end of the run, I realized how peaceful it was outside. It was also nice to check out all the houses decorated for Christmas.

Pacers is the local running store in the DC area. They posted on facebook a status wanting to hear what kind of milage everyone was running for Christmas Eve and Christmas Day. Whoever had the best mileage won a race entry for February or March. Guess what… I WON!!

I am so excited! I never win anything! Can’t wait to run a St. Patty’s day race. Thank You, Pacers!!!

Now that Christmas is over, I am feeling much more relaxed, and very excited about the New Year! New Years is my favorite! I can’t wait to share with you my highlights for 2013, and my new goals for 2014. ┬ĀSo stay tuned…

I want to say a special thank you to my sister, mom, and of course my fiance, his parents, and stepsister who gave me gifts this year. ┬ĀAll of them were amazing and I have been so spoiled. Thank you!